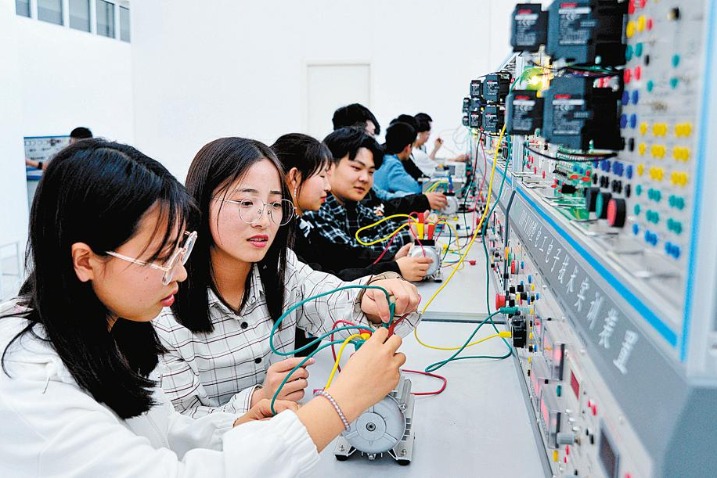 China has drawn red lines for internships for vocational school students to prevent them from being forced to do repetitive and intense unpaid work.

To help students learn practical skills, vocational school students are required to work as interns for a period of six months.

However, some greedy vocational schools have arranged for their students to work as factory assembly line workers for long hours and many night shifts, the education department’s head of vocational and adult education said in a statement Friday.

The ministry and eight other government departments issued a guideline recently to fill in the gaps in arrangements for the training of vocational students and to better protect their rights and interests.

The guideline said that vocational schools, businesses and students must sign internship agreements and no third-party agencies are allowed to organize, manage or make use of student internships.

She added that training should be related to the students’ specializations and should not be repetitive, labor-intensive or profit-driven.

All trainings organized by the school must be approved by the students and their parents, and those who do not wish to take part in such trainings must be allowed to find suitable jobs themselves.

She added that schools should not force students to take internships at certain companies, or carry their student cards or ID cards as a form of coercion.

She added that payments for internships must be no less than 80 percent of what employees receive in the same jobs or minimum wage, and must be cash payments, not vouchers or other goods.

There have been cases of students getting injured while working as apprentices or committing suicide due to harsh conditions.

A 17-year-old vocational school student jumped to his death from a factory dormitory in July after being forced to work long hours as part of mandatory training.

The student, surnamed Yu, was studying computer science at Xi’an Hanjiang Technical School in Hubei Province, but the school sent him and more than 90 other students to a factory in Shenzhen, Guangdong Province, China Newsweek reported.

They were asked to work more than 10 hours each day while carrying boxes of more than 20 kilograms each. The magazine quoted Yu’s father as saying that students were not allowed to request time off or not show up for work.

The father said Yu often complained about the long hours and said he was targeted by his supervisors.

A 19-year-old student at a vocational school in Linwu County, Hunan Province, had to amputate two fingers after his right hand was caught in a machine during a training organized by the school at a new energy company in January last year, the Workers’ Daily reported.

Since the student did not sign an employment contract with the company, the injury could not be treated as a work-related injury, and the school and the company evaded their responsibilities, the newspaper said.

The key to preventing such incidents is for vocational schools to conduct strong background checks on companies whose students do internships, said Ma Jian, director of the registration and recruitment department of Guangzhou Vocational School of Pharmaceuticals.

“Internships are not work, so vocational schools have to keep track of student conditions and companies cannot meet the same standards as full-time employees,” he said.

It’s unrealistic to expect students under the age of 20 to have much self-discipline, Ma said, so teachers should contact students every day to learn about their conditions and students should go back to school at least once a month to report on their progress.

Dong Xiaohui, a 17-year-old student at Jinan School of Technology in Shandong Province, said the guidelines provide a guarantee for students working as apprentices that they won’t have to worry about abuse and that they will be able to learn practical skills.

He worked in a local supermarket chain for more than four months as part of the training organized by the school, earning more than 3,000 yuan ($474) per month and working eight hours a day with two days off each week.