Exclusive: Zelensky says world should be prepared for possibility Putin could use nuclear weapons 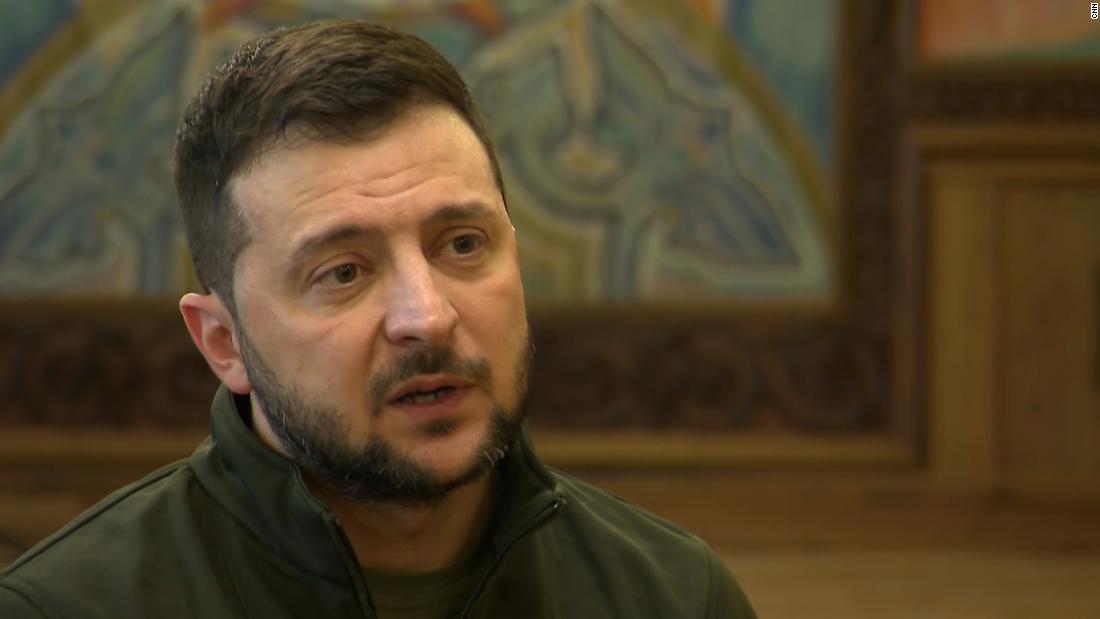 [adace-ad id="2627"]
Zelensky told CNN’s Jake Tapper in an exclusive interview from the office of the president in Kyiv on Friday that Putin could turn to either nuclear or chemical weapons because he does not value the lives of the people of Ukraine.

“Not only me — all of the world, all of the countries have to be worried because it can be not real information, but it can be truth,” Zelensky said, switching into English to emphasize his point.

“Chemical weapons, they should do it, they could do it, for them the life of the people, nothing. That’s why,” Zelensky said. “We should think not be afraid, not be afraid but be ready. But that is not a question for Ukraine, not only for Ukraine but for all the world, I think.”

In the wide-ranging interview, Zelensky spoke about the sinking of a Russian ship, the consequence of his military has taken and the emotional toll the war is having on him and his people.

Zelensky has remained in Ukraine throughout the 50-day war with Russia, as Ukraine’s forces have resisted the Kremlin’s attempts to seize Kyiv and forced Russia to refocus its war efforts on the eastern and southern regions of the country, where Ukraine is anticipating a significant escalation in fighting in the days to come. At the same time, Russia is firing cruise missiles into the outskirts of Kyiv and still maintains the ability to target Ukraine’s capital with long-range weaponry.
[adace-ad id="2627"]

US officials have warned about the possibility that Putin, if backed into a corner, could turn to the use of tactical nuclear weapons in Ukraine. CIA Director Bill Burns said Thursday that the CIA watches “very intently” over the possibility, while emphasizing that the US has not yet seen any signs that Russia is preparing to take such a step.

“Given the potential desperation of President Putin and the Russian leadership, given the setbacks that they’ve faced so far militarily, none of us can take lightly the threat posed by a potential resort to tactical nuclear weapons or low yield nuclear weapons,” he said in public remarks at Georgia Tech.

One of Russia’s most important naval warships sank in the Black Sea this week, which Ukraine said was the result of a strike, while Russia claimed it was due to a fire caused by the detonation of ammunition.

A senior US defense official said Friday that two Ukrainian Neptune missiles had hit the Moskva, and an American official said that the strike and subsequent sinking of the ship was the result of a Ukrainian missile. Zelensky, however, was cagey about whether Ukraine had played a role.

“We know that it does not exist anymore. For us, it is a strong weapon against our country, so its sinking is not a tragedy for us. I want you, the rest of the people, to realize that. The less weapons the Russian Federation that has attacked our country has, the better for us.

Zelensky said that Ukrainian officials think about 2,500 to 3,000 Ukrainian troops have died in the war, comparing the figure to what he said are Russia’s casualty numbers of 19,000 to 20,000 (Russia has acknowledged 1,351 military consequence). Zelensky added there are about 10,000 Ukrainian troops who have been injured and that it’s “hard to say how many will survive.”

Civilian consequences are more difficult to quantify, he said.

“It is very difficult to talk about civilians, since south of our country, where the towns and cities are blocked — Kherson, Berdyansk, Mariupol further east, and the area to the east where Volnovakha is — we just don’t know how many people have died in that area that is blocked,” Zelensky said.

Asked about the harrowing videos released this week showing the death and devastation in his country, including a Ukrainian woman finding the body of her son in a well, Zelensky said, “It is a great pain for me.”

“I can’t watch it as a father, only because all you want after this is revenge and to kill,” he said. “I have to watch as the president of the state where a lot of people have died and lost their loved ones, and there are millions of people who want to live.”

“All of us want to fight,” he continued. “But we all have to do our best for this war not to be endless. The longer it is, the more we would lose. All these losses will be just like that one.”