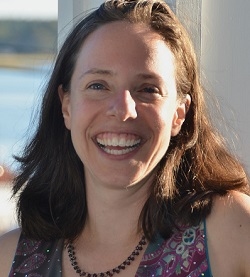 For Rachel N. Albert, the roots of social consciousness run deep. When she was five, she accompanied her mother, who distributed brochures on the environmental impact of nuclear power.

“My parents were early advocates of organic farming and were sounding the alarm about pesticides long before the harm they were doing became public knowledge,” she recalls. “I grew up in a socially conscious family where we routinely discussed issues of racial, social and economic equality at the dinner table. From a young age I knew that the way society was organized treated many people unfairly.”

Recently promoted to CEO of Food Link, Albert discovers in the past a harvest of meaning that helps make sense of the present.

Inside Arlington:
Among our multifaceted population

“I also learned that I was relatively lucky. I always had enough to eat, a comfortable home and a good education.

“My father is a doctor, so I was also aware of the amount of suffering out there. I’ve always wanted to do what I can to alleviate human suffering, especially when it stems from the unfair distribution of basic resources.”

The pursuit of justice in an unjust world informs the expanding nonprofit organization Save Food.

“The growth of the organization over the past nine years has been really remarkable,” she says, referring to co-founders Diane Dupont and Julie Kramer. “I think it is a testament to [their] Determination and strength of vision… that they were able to get a lot of community support right from the start. Each year, the support kept increasing – and then exploded during the pandemic, when food insecurity escalated.”

With a couple seeing food unnecessarily discarded in a small coffee shop in 2012, the founders launched a rescue effort whose numbers were staggering — more than 250 volunteers working with more than 100 food donors collect 1.2 million pounds of food serving 80,000 people in 2020. – – All from a 7,000-square-foot hub at 108 Summer St. which opened last February.

“I am excited about the mission to save food because it is an elegant way to tackle two of our most pressing social problems simultaneously: climate change and poverty. The environmental impact of food waste is almost as important as that of fossil fuels, but we still don’t talk about it as much. That must change. .

“At the same time, food insecurity – which is really just a manifestation of poverty – affects about 10 percent of the population, which is higher among families with children and BIPOC residents. This is really unacceptable in a rich country as us. I feel the need to do everything in my power to address this injustice, and I find it even more enjoyable that we can be part of the solution just by preventing fresh, nutritious food from going to waste!” – Rachel Albert

In light of this exponential growth, Albert has set its own goals for Food Link.

Now that Food Link has gone from a grassroots startup led by volunteers to a nonprofit with its own custom-renovated building, nine salaried employees and 11 board members, she says. The first is to develop a fully sustainable financing model of our larger scale.

With an annual budget of $1.2 million, the nonprofit saves more than 4,000 pounds of food daily and delivers it to agencies across 50 communities in eastern Massachusetts.

“Food Link is fortunate to have a strong network of food donors and a broad base of government, institutional and individual funders,” she notes. “We need to determine which of these sources we can rely on to be renewable year after year and how to balance them for long-term financial health.”

This leads us to a second goal: deepening its impact. “In the new year, we will launch a strategic planning process to learn more about the biggest unmet needs in the communities we serve, and which of these Food Links are best to address,” she said. “We will deal with basic strategic questions.”

These include whether to expand to new locations and the types of new partnerships or food donors Food Link might want to try. For example, whether those involved work with coffee shops and not restaurants. And whether you want to add completely different types of impact to our portfolio, such as education, policy work or change the level of other systems.

When asked how she plans to reach these high hopes, she replied that the strategic planning process “will bring a sharper focus to the kinds of impact – beyond scaling up food rescues – that we will strive to achieve over the next three to five years. How we achieve these goals will of course depend on for what it is. I look forward to an inclusive engagement in which we solicit input from a wide range of stakeholders to provide a fresh perspective on the role we can play within the greater Boston ecosystem in achieving food justice.”

When asked how public aspects of her background support her to reach her broader goals, she cited her professional background in nonprofit leadership and strategic planning. “I’ve become a perfect fit for what Food Link is now in its growth trajectory,” she says. She has a master’s degree in business administration and social work from Columbia University and has been a strategic planning consultant with the Bridgespan Group.

Since then, she has alternated between internal roles at the nonprofit—including vice president for assessment and learning in the Jewish Family and Children’s Service and financial and administrative director at Birches School in Lincoln—and independent consulting, working with a variety of educational and humanitarian nonprofits.

“I have a special interest in nonprofits that have just matured after their initial phase,” she says. “It is a time when there is still a lot of energy and excitement, but there is also a core team in place with defined roles and responsibilities and an organizational culture that has merged without becoming outdated. It is a time of huge possibilities in terms of how we can serve our mission, as well as rapid professional growth of the employees involved.”

Apart from its non-profit aspect, other aspects emerge. Albert received his BA in Psychology from the University of Rochester and in Voice Performance from Eastman School of Music.

Are you still involved in music? “I sometimes get involved in chamber music groups, but that all stopped during Covid.”

She was mostly raised in Newton, and also spent a great deal of time abroad as a child. She lived in France for a year, entering first and sixth grades in Israel. She also spent a year abroad between high school and college, studying voice in Italy and working on a kibbutz in Israel.

Albert lives with her husband, a mathematician, and their 11-year-old son, Gabriel, who is in sixth grade.

She was appointed interim CEO in April, replacing DuPont. Board Chair Nora Mann writes: “After 7 months of success on the job, the Board of Directors has unanimously appointed Rachel to the permanent position effective December 1. The Board remains grateful and appreciative of the founders’ creativity, hard work, and commitment.”