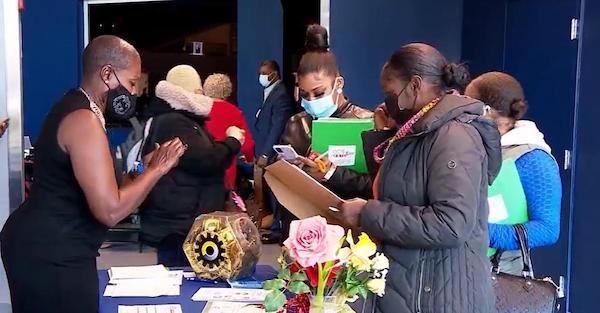 Hundreds of district residents gathered in Booth 8 for the “Jobs No Guns” job fair East River in the Sports and Recreation District on November 19, which offered employment and education as an alternative to a life of crime.

The work of the DC Business Gun Violence Prevention Coalition, made up of Inner Thinkts, Inc. , the National Association of Minority Contractors – Washington, D.C., and interested black business owners in D.C., as primary sponsors of the show.

The coalition sought to support the Bowser Department’s Building Blocks DC, and the Emergency Operations Center’s armed violence prevention efforts to thwart the city’s shootings and killings through a job fair. The job fair on November 19 follows the first “Jobs No Guns” event at the Martin Luther King Jr. Memorial Library in the Northwest on July 21.

Urging residents to participate in the job fair

At the opening ceremony, speakers including D.C. Councilman Trayon White (D-Ward 8) and D.C. Police Chief Robert J. Conte III encouraged participants to explore what county government, the private sector and nonprofit organizations have to offer with regard to social services and employment.

Linda K. Harley Harper, director of Building Blocks DC, said the job fair comes at a time when “many people are feeling helpless.”

“This event could create a pathway into the middle class,” Harper said. It provides job opportunities for people regardless of the skill level they possess. The capital is rich in resources but many people feel that the services provided are not for them.”

Keri Haley, director of admissions at Northwest Central Polytechnic, said his school’s leadership is prioritizing participation in the event.

“Our job at our school is to train people for jobs,” Hayley said. When people are employed, they are less likely to be involved in crime. People with stable jobs become role models in society.”

Virginia Hensley, senior director of human resources at the Anchor Construction Company in the Northeast, came to the event to find workers.

“We have jobs available for people who can work in construction and underground facilities,” she said. “We need a lot of people to join us. With the approval of the new infrastructure bill, we will need quality workers for our projects.”

Eric Weaver, founder and president of the National Association for the Advancement of Returning Citizens, said the job fair has been a good resource for his constituents.