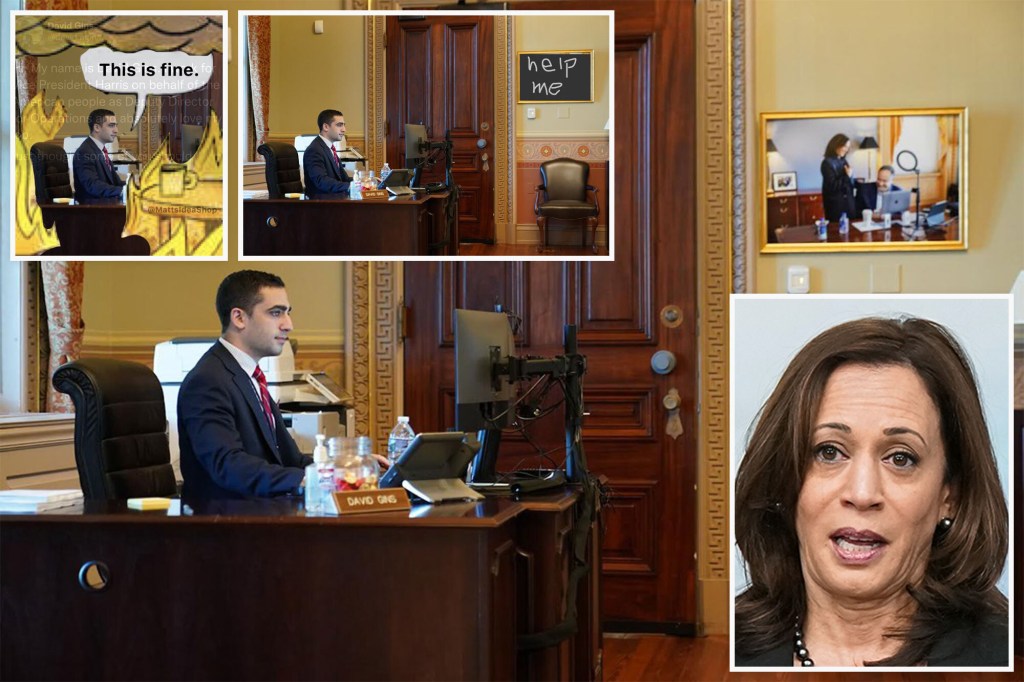 An aide to Vice President Kamala Harris responded to staff walking out of her office by publicly declaring how much he loves his job — only to be roasted online.

After a scathing report calling Harris a “bully” throwing out “soul-destroying criticism,” David Gins took to Twitter to say he’s never been happier.

“Hello. My name is David Gaines. I work for Vice President Harris on behalf of the American people as Deputy Director of Operations and absolutely love my job” chirp Sunday.

He added, “I think some of you should know” along with a smiley face emoji.

Gaines — whose profile lists the past actions of the Georgia Democratic Party, President Biden’s 2020 campaign and data company Civis Analytics — also posted a photo of himself sitting stiffly in a jacket and tie behind a desk in an ornate office.

A large picture in a gilded frame on the wall to his left showed Harris standing behind a desk next to second man Douglas Imhoff.

Jens’ tweet quickly sparked more than 7,000 comments, many of which indicated he was less outspoken.

“Close your eyes twice if you need Dave’s help,” one commenter sneered, likening him to a hostage.

“Looks like you’re going to the gallows, brother,” another tweeted.

Florida Governor Ron DeSantis’ spokeswoman, Christina Buchou, pointed What she called a “thousand-yard stare” for the jeans and added her own emoji – even though she was crying.

Below it is a screenshot of Gins’ tweet with red lines around a string of letters that read “I’m a hostage”.

Other tweets in this context included, “David, please post a picture of you holding today’s newspaper.”

Good on you, David. Another said you don’t in any way look or sound like someone is out of the frame, holding a sign that says, ‘Make that sound good if you want to work again.’

Some Twitter users have replaced the image within the frame, including images of the words “help me” written in white letters on a black background and a cat holding a rope under the words “HANG IN THERE!”

On Saturday, The Washington Post reported that Harris’s caustic management style has caused turmoil among its top employees and cited the recent resignations of four people appointed to shape her public image, including keynote speaker Simon Sanders and chief communications officer Ashley Etienne.

Harris’s 2020 presidential bid – which collapsed in early December 2019 – has also been plagued by reports of unhappy employees, including a top aide who resigned in a letter saying, “This is my third presidential campaign and I’ve never seen any organization address it before.” The staff is very bad.”

During the daily press briefing at the White House on Monday, Press Secretary Jen Psaki was asked if anyone had asked Jane to “post a positive tweet…or is that all there is to it?”

“But I work with a number of people who are definitely looking to continue their careers.”