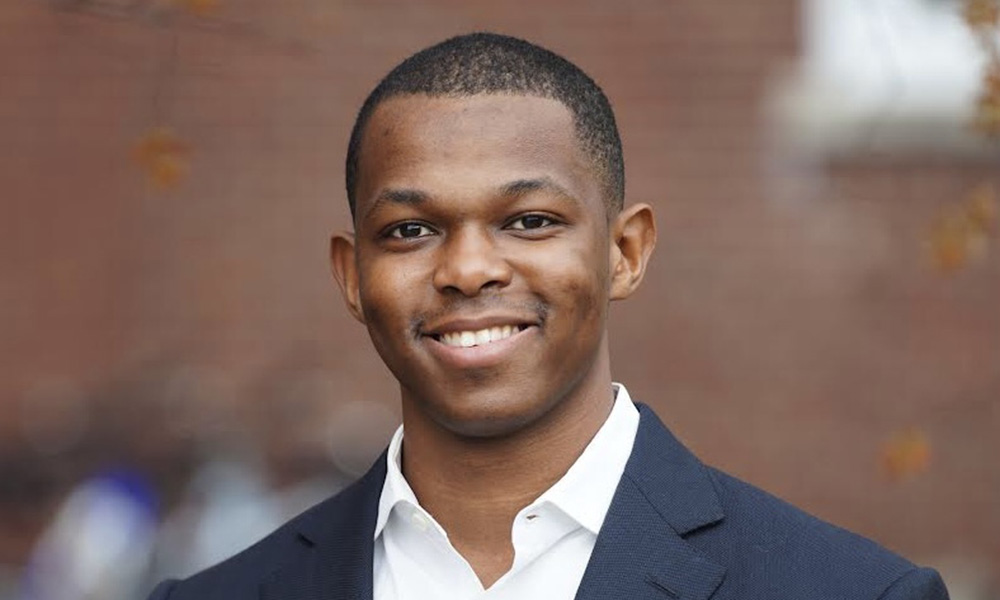 Kudzai Mbinda ’22, a chemical engineering professional from Harare, Zimbabwe, has been selected as the Rhodes Scholar. Mbinda plans to pursue a master’s degree in Energy Systems at Oxford University, followed by an MBA. (Photo by Frederick Liu 23)

The Chemical Engineering major from Harare, Zimbabwe, is the second recipient of the Rochester Rhodes Scholarship in two years.

Kudzai Mbinda ’22, a chemical engineering specialist from Harare, Zimbabwe, is among 100 students worldwide selected to begin their postgraduate studies at Oxford University in Great Britain as a Rhodes Scholar next fall. The Rhodes Scholarship is among the most prestigious academic awards in the world, and Mbenda was one of two shortlisted out of 10 finalists competing in the Zimbabwe competition.

This is the second year in a row that a University of Rochester student has been awarded the scholarship. Bouclair Mabanya Junior 20 was selected from Cameroon last November and is currently at Oxford for a master’s degree in sustainable energy.

First awarded in 1902, the Rhodes Program is the oldest international scholarship program for post-baccalaureate study. Scholars are selected according to criteria that include intelligence and outstanding personality, as well as motivation to tackle global challenges, a commitment to serving others, and a promise to become principled leaders in the future.

“The announcement of being a Rhodes-chosen scholar was a surreal and humbling moment,” says Mbenda, who was joined by MacDonald Mutekwa, a graduate of Nanjing University of Aeronautics and Astronautics in China, as a recipient from Zimbabwe. Applicants compete in constituencies based on their nationality, and each competition region selects scholarship winners from its own pool of finalists.

Mbinda is the first Rochester student to earn a Rhodes degree while still an undergraduate since J. Timothy Londergan ’65, and is now Professor Emeritus of Physics at Indiana University-Bloomington. The only Rhodes scholar in Rochester was the late Robert Babcock ’37, who later became Vermont’s deputy governor.

Mbinda plans to pursue a master’s degree in Energy Systems at Oxford University, followed by an MBA. He is committed to driving social impact in his homeland, at the intersection of engineering and business. Like Mbanya, he came to Rochester through the African Leadership Academy in Honeydew, South Africa. “I’ve been studying away from home since 2016 and have only come home a few times,” he says. “But I plan to leverage the knowledge and network I develop at Oxford to contribute to the development of the industrial sector in Zimbabwe using business as a tool to drive growth.”

Mbinda shared a 45-minute interview with Zoom last week with the eight-person selection panel (which includes five former Rhodes Scholars). “It was very scary and nerve-wracking,” says Mbenda. “I rehearsed my responses, did a practice interview, and decided how I would organize my responses. But as soon as I started, I immediately forgot my intent and rehearsed the answers. They asked difficult questions and captured even the smallest details in my responses.”

Once Mbenda learned he had been selected, the first person he told was Susan Hunter, director of research and selection at African Leader Academy and one of his references.

Mbinda is a member of the university’s Chem-E Car team, the African Students’ Association, and the track and field team, holding the school’s record in a 60-meter indoor dash (7.08 seconds). He was also a Summer Teaching Assistant in 2019 and 2020 for Early Connection Africa, a four-week bridge program hosted by the university for African students beginning undergraduate studies in the United States and abroad. He says a summer analyst position made him want to pursue an MBA. “It helped me realize that there are many business, financial and management considerations that need to be made before innovations are readily available for people to use,” he says. “The MBA is an opportunity to begin learning about the ‘non-technical’ considerations that affect the engineering field.”

“As a mathematical researcher who excels in both chemical engineering coursework as well as as a member of the athletic track team, Kudzai has taken advantage of the many opportunities available at the university,” says Heinzelman. “I look forward to seeing all the wonderful things that Kudzai will be able to achieve as a scholar from Rhodes Scholar and beyond.”

Belinda Redden, Director Fellowships in Arts, Sciences and EngineeringShe also says that Mbenda’s choice “impresses” her and her staff.

“It is a well deserved appreciation for Kudzai’s strong intellect, leadership example, high moral character, and deep commitment to directing his talents to a purpose that transcends his material comfort and self-satisfaction. He is the heart of a servant leader the size of his ambitions.”

Realizing the controversy in both South Africa and Britain over the scholarship’s namesake, Cecil Rhodes, Raiden points to another reason to rejoice: the possibility that he and his future work could help him navigate a painful history.

“It is fitting that this Southern African should continue to the next stage of his academic, professional and personal journey at Oxford with funding made possible by the wealth already extracted from the land and the work of his ancestors,” she says. “He is a very excellent person to go beyond this history by deploying the social and cultural capital to educate the elite for transformative change for the benefit of Africans.”

Track and field coach Sam Albert, who has known Mbenda perhaps longer than anyone in college, says he is “extremely happy” to see him rewarded for his hard work.

“Since joining our program three years ago, Kudzai has embodied everything we require our student-athletes in Rochester to be,” says Albert. “He excelled in his studies while also setting up a record career as a runner. He constantly shows his true appreciation for the opportunities offered by Rochester, and all of his accomplishments have been possible because he holds himself to such a high standard.”