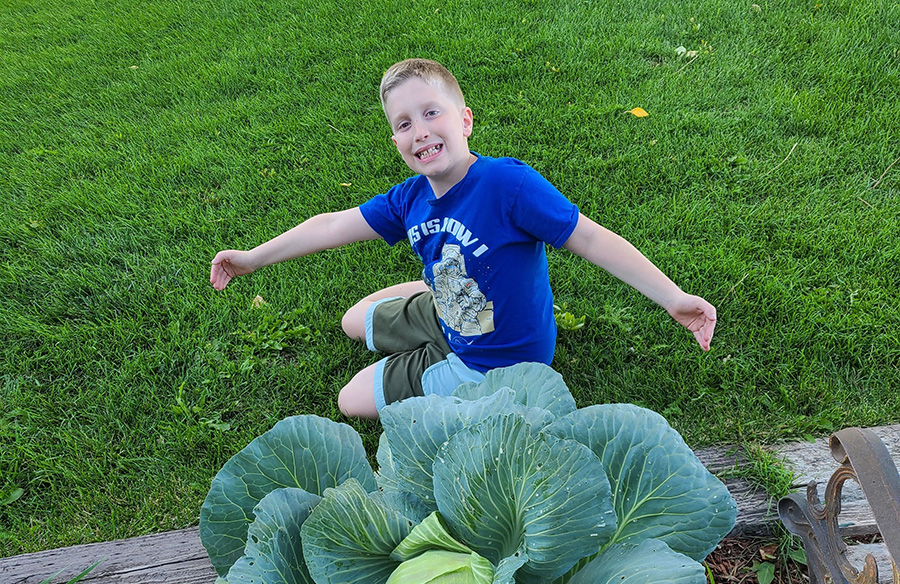 MIDDLE EAST – A nine-year-old boy is taken home “the green” after winning a $1,000 scholarship to grow a giant cabbage.

Peter Kamans attended Roberts Elementary School and participated in a statewide competition when he was in the third grade. Recently selected as the Idaho Winner for “Best in the State” in the third grade Bonnie Plants Rolling Show. He was able to grow five pounds of cabbage.

“I was so excited, so excited (to win)!” Peter told EastIdahoNews.com `Tuesday.

He said he came home from school one day with Bud.

“They[the teachers]gave me and said, ‘The person who wins, gets a $1,000 scholarship’ and I was like, ‘Okay! “So I brought it home and planted it in the ground (in our backyard) and then it started growing a lot. It withered a little bit but was very slow at first but it grew very, very fast,” Peter said.

Megan Kamans, Peter’s mother, said she didn’t know much about the grant when Peter came home and told her about it. She’s not a gardener either, so she wasn’t sure how it would all turn out in the end.

“It’s designer but we didn’t really know what we were doing. We just watered it and it got bigger and bigger and bigger,” Megan said. “When it was growing, I was like, ‘This is huge, maybe it’s going to win.’ Then I looked at the previous winners and said, ‘” Well, it’s comparable but it’s a statewide thing” and I thought, there are growers and gardeners out there and we’re not. “

To Megan and Peter’s surprise, he won.

According to a news release sent by Bonnie Plants based in Union Springs, Alabama, nearly 200,000 third graders in 48 states grew a giant cabbage. One student in each state received a $1,000 scholarship for education from Bonnie Plants. Their website says they are the largest grower of vegetable and herb plants in the United States

Bonnie Plants launched the Tier 3 cabbage program in 1996, selecting cabbage because it was the first profitable crop the company sold.

“We are delighted to once again see so many students able to participate and learn the basics of gardening as well as life lessons such as responsibility, self-confidence and achievement,” said Mike Sutterer, President and CEO of Bonnie Plants.

Students took a picture with their cabbage when it was fully grown and presented it for a chance to win the scholarship. According to the press release, the winners were selected by Bonnie Plants in collaboration with the state’s Departments of Agriculture based on the student’s enthusiasm for participation and learning as well as the overall size and appearance of the cabbage.

Peter and Megan said they ate cabbage with their family of three and invited neighbors to join them since there was a lot of it.

“We made three different cabbage dishes. I don’t cook cabbage. It’s a random vegetable,” Megan said. It should be a good place to grow things, so we’ll try next year, maybe potatoes.”

Peter told EastIdahoNews.com that the cabbage was very tasty. One of the dishes that his mother prepared was an Ethiopian dish. He said he would eat cabbage again.