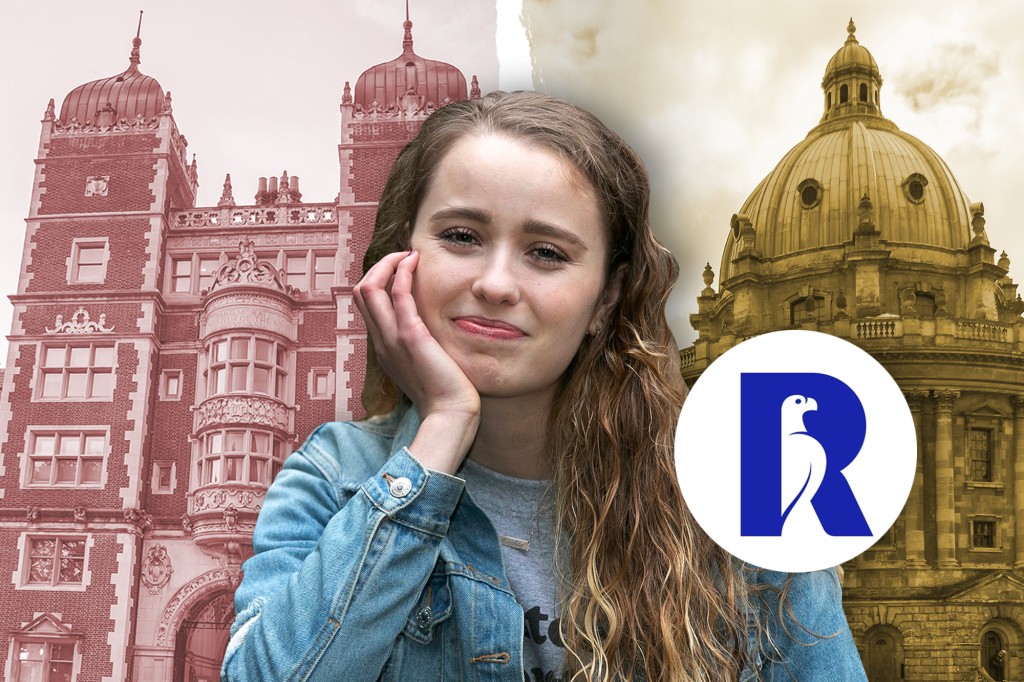 In November 2020, when University of Pennsylvania graduate student Mackenzie Firestone won the prestigious and highly competitive Rhodes Scholarship to study at Oxford — one of only 32 scholars selected from a pool of 2,300 applicants — the president of the Ivy League school praised her in a newsletter.

MacKenzie deserves this prestige
“Opportunity,” said 23-year-old President Amy Guttman of the suburb of St. Louis. As a first generation [to go to college] A low-income student and former foster youth, MacKenzie is passionate about championing youth [and] dedicate themselves to a life of public service.”

But a few months later, Fairstone lost her prestigious scholarship and was fighting accusations that she had been “blatantly dishonest” about her childhood in her applications in Pennsylvania and Rhodes.

Now, an investigation into her story has been revealed by the Chronicle of High Education—including the findings of the Rhodes Commission that Fierceton “created and repeated false accounts of herself,” using these “misrepresentations” to advance her interests as a contestant. software. “

The case also reveals the shadowy side of elite schools like Penn and their quest to “show that they are changing society rather than washing away inequality” by accepting “outstanding” applicants with truly tragic backgrounds, according to a Chronicle report.

Several college advisors told The Post that the university’s application process now includes more questions about overcoming obstacles. The 2021-2022 article claims from Common App, the organization that oversees undergraduate applications for more than 900 schools, includes “a recalculation of when you experienced a challenge, setback, or failure.”

“There is a lot of pressure to apply right now,” Marco Santini, a college education consultant in New York, told The Post. “I always try to tell the students not to do the crying story because there is always someone with a sad story. I tell the students that when they apply, they have to make sure that everything they said in their personal statement is true… and that they stick to what they wrote.”

She bills herself as a first-generation, low-income freshman with a history of horrific abuse — who also had nearly A grades and was the head of the student body in high school — Firestone definitely fits that bill. She was accepted into Penn in 2015 to study political science and then began studying for a clinical master’s degree in social work in 2018.

When the Fierceton Scholarship in Rhodes was announced, the Philadelphia Inquirer named the academic star in November 2020, noting that she “grew up poor, cycling through the rocky child care system.” [and] Bounce from one foster home to another.”

As Firestone said in that story: “I will trade [the Rhodes honor] She was adopted and has a family.”

But then on November 22, 2020, the profile was triggered, an anonymous defendant sent an email to the Penn and Rhodes Trust, claiming that Fierceton’s story was “blatantly dishonest”. The email reportedly claimed that Firestone grew up in St. Louis, Missouri with her mother, an educated radiologist; that her family was of the upper middle class; She attended a wonderful private high school and enjoyed fine hobbies such as horseback riding.

The publication was unable to confirm when Ben received this email. Fierceton provided statements to her hometown newspaper that directly indicated her attendance at Whitfield School and thanked the many teachers there who mentored her in an article published on November 24, 2020.

According to the Chronicle, Firestone lived with her mother, Carrie Morrison — a divorcee and director of mammography and mammography at a local hospital — “on the [suburban] A tree-lined cul-de-sac with large houses and well-groomed lawns.”

She attended Whitfield School, a $30,000-a-year private school in St. Louis, although the Chronicle did not say how her tuition was paid or whether she received financial assistance.

In 2019, Firestone later testified in a court hearing, in September 2014, her mother allegedly pushed her down a flight of stairs and hit her in the face multiple times. The teen said she was sent to hospital the next day after collapsing at school. Firestone’s mother denied the account and said the teen accidentally took two or three steps while Morrison was helping to remove chewing gum from her hair.

Morrison told the Chronicle in a statement, “Mackenzie is very much loved by her mother and family. Our greatest desire is for Mackenzie to choose to live a happy, healthy, honest, and fruitful life, using her extraordinary talents to the maximum benefit.” (The Post was unable to reach Morrison’s attorney or Firestone or Dion Rasias for comment.)

After the 2014 incident, Morrison was arrested and charged with two counts of felony child abuse or neglect and misdemeanor assault – charges that were later dropped. An email from Assistant Attorney General Michael Hayes, reported in the Chronicle, stated: “The more you learn, the more [about the case]I became less certain about what really happened.”

When Bene received the anonymous accusations about Firestone, she was reportedly interrogated in the fall of 2020 by the university’s vice dean, Dr. Beth Winkelstein, about everything from her mother’s job and her income to the trash bag of donated clothing she said she pulled. From house to house in her essay request to Rhodes.

According to Winkelstein’s subsequent report, Firestone was raised in an upper-middle-class family. It also notes that her mother is a radiologist and that her grandfather has graduated from college.

No one disputes that Fierceton spent a year in formal foster care, during which time she moved to different homes, then continued to live with a foster family. But Winkelstein said in a letter to the Rhodes Commission, sent a week after her call with Firestone, that the student had “made up a story about her childhood” and recommended that the commission conduct its own investigation, which it did in April 2021.

The Rhodes Firestone Commission questioned the undergraduate essay you wrote when you applied to the University of Pennsylvania. In it, she gave details of her hospital stay after the alleged incident with her mother, including claims that her hair was “stained with dry blood” and that her facial features were “so disfigured and swollen that I cannot distinguish them.”

The committee concluded that this “contradicts the hospital records,” adding: “Either [Fierceton] This abuse was made up by her mother, or her mother lied about the terrible abuse…”

The Commission recommended that the Firestone Rhodes Scholarship be rescinded. In response, she withdrew herself from the honor.

A Penn spokesperson told The Post: “Penn and the Rhodes Trust have received credible information that has raised questions about statements made by Ms Fierceton in her applications for admission, financial assistance and scholarships.” “The Rhodes Trust conducted its own investigation, during which it considered the evidence and arguments presented by Ms. Fierceton and her counsel…The Trust then gave Ms. Fierceton the opportunity to withdraw her nomination if she chose to do so. Ms. Fierceton accepted this offer and withdrew her nomination.”

Ben then followed up with his own official investigation in August 2021, investigating Firestone’s assertion that she would be the first in her family to graduate from college.

As the Chronicle reported: “If ‘first generation’ means the first member of the family to attend college – which is the widely used meaning – then Firestone’s answer would be clearly wrong.”

However, according to the school’s website, this definition can also include students who are the first to “pursue their higher education in a prestigious institution” in their family. Firestone’s mother did not attend an Ivy League university, although The Chronicle does not indicate where Morrison went in college.

Furthermore, the website of Penn First Plus, the school’s inclusiveness initiative, expands the definition of the first generation to include students who “have a strained or limited relationship with someone(s) in your family who holds a bachelor’s degree.”

By the time she applied to Penn, Fierceton was away from her mother and supporting herself. However, the school found Firestone describing herself as a “first generation” in her application to graduate from the school as “objectively inaccurate”.

Santini, the college advisor, noted: “On the economic side, there are so many applications to schools that it is impossible for schools to validate everything.”

Ben is now withholding his Firestone master’s degree – which she was due to receive in May 2020 – pending a final disciplinary decision. Your bachelor’s degree apparently is not in question.

“Credibility is essential to Pennsylvania’s academic integrity as well as a primary selection criterion for the Rhodes Foundation,” the University of Pennsylvania said in a statement to the Chronicle.

Just before Christmas, Fierceton — who changed her last name while in college — filed an explosive lawsuit in Philadelphia General Court, claiming that the university, its trustees, and three Pennsylvania officials were involved in a complex plot against her.

She alleges that Bean conducted a “spurious investigation” into her background, unduly withheld her master’s degree and wrote a “confidential letter” to the Rhodes Commission to discredit her. Prosecutors also accuse Wendy White, Bain’s general counsel, of threatening to “stalk” the two Fierston degrees if she did not give up the Rhodes Scholarship.

Furthermore, in her lawsuit, Fierceton alleges that the school conducted its investigation because it complained to officials about inadequate access to emergency services in Penn after she had a seizure at the school in early 2020.

“We are disappointed that MacKenzie Firestone has chosen to file a lawsuit, especially after she had so many opportunities in Pennsylvania,” the Pennsylvania representative told The Post. “There is no basis for Mrs. Fairstone’s allegations.”

Fierceton seems to have quite a bit of regret for her articles. As she told the Chronicle, “The place I’ve come to is that I have the right to write about my experiences as I have experienced them. Period.”

Jerry Oppenheimer is a renowned biographer and a frequent contributor to The Post.