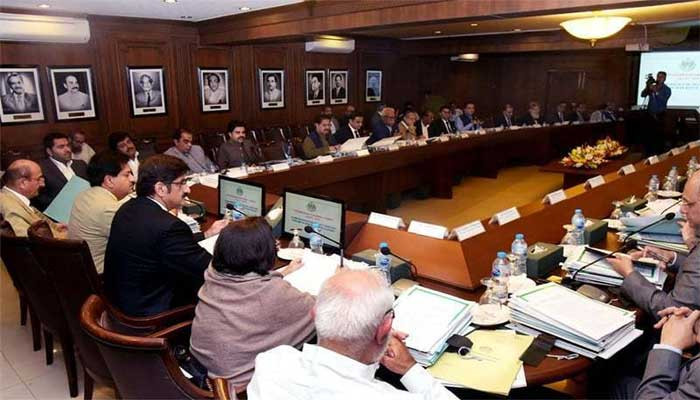 The Cabinet meeting in Sindh on Thursday chaired by Prime Minister Syed Murad Ali Shah at the CM House discussed and decided 26 items on the agenda, including approving a bill for the appointment of deputy counsellors, approving the appointment of trainee teachers and recruitment rules for the regional police service. To create a district police cadre. The meeting was attended by all the provincial ministers, advisors, special assistants, Acting General Secretary of Sindh District Qazi Shahid Parvez and others.

The Council of Ministers discussed and approved the Research Committee draft law 2021 to appoint vice presidents of universities and other employees in public sector universities in the governorate. The relevant committee may be constituted by the Chief Minister consisting of the Chairman of the Higher Education Commission of Sindh, the Secretary of the Universities and Board of Directors, the Secretary of Education of the College, and two selected members of the relevant university class to be nominated by the Government from a five-person committee sent by the President.

The tasks of the search committee, according to the bill, include defining recruitment criteria for deputy advisers, scrutinizing applications and shortlisting in light of the criteria, interviewing shortlisted candidates, and recommending a committee of three most suitable candidates to the Cabinet. for the final selection. The Council of Ministers approved the draft law and referred it to the Council.

The meeting was also informed that 318 upper secondary schools, both for boys and girls, are facing an acute shortage of subject specialists for the eleventh and twelfth classes. Officials said a request for appointments to these teaching jobs has been sent to the Sindh Public Service Commission, but that it will take some time.

The Cabinet decided to appoint interns on the basis of need only on the basis of merit. The meeting agreed to grant a training allowance of up to INR 50,000 per month to trainees subject to satisfactory performance.

Interns will not be organized or appointed on a contractual basis. The period of employment until joining a regular subject specialist will be. Of the 1,500 detainees, 240 will teach physics, 240 chemistry, 120 mathematics, 120 botany and zoology, 240 English, 60 Pakistani studies, and 60 Islamic, Sindhi and Urdu studies.

The Ministry of Home Affairs has informed the Cabinet that it has drafted recruitment rules for the higher ranks posts from Superintendent BS-18 to Additional IGP BS-21 in Sindh Police.

Appointment to senior rank positions below that of Inspector General of Police shall be made in accordance with the relevant recruitment rules set forth in the Civil Servants Act of Sindh 1973.

Additional IGPs (BS-21) will be recruited through promotion to DIGs (BS-20) who have at least 22 years of service at BS-17 and above, including three years at BS-20, based on seniority and fitness.

DIGs (BS-20) will be appointed through promotion Senior Supervisors or AIGPs (BS-19) who have a minimum of 17 years of service at BS-17 and above, including three years at BS-19, based on seniority and fitness.

SSP/AIG (BS-19) will be appointed through promoted supervisors (BS-18) with at least 12 years of service at BS-17 and above, including three years at BS-18, based on seniority and fitness .

The SP/ADIGP (BS-18) will be appointed through the promotion of Deputy Superintendents (BS-17) who have served at least five years on the basis of seniority and fitness.

The SP/ADIGP (legal-BS-19) will be appointed by promotion of Deputy Superintendents (BS-17) with at least five years’ service based on seniority and fitness.

The Cabinet was told that the Constitution and the Pakistan Police Service Rules of 1985 did not prevent the provincial government from making substantive employment rules and they did not suggest approval of the Federal Government because the question of police or police service was not included in the federal legislation existing.

After extensive discussion, the Council of Ministers decided to form a committee headed by Energy Minister Imtiaz Sheikh with other members being Industry Minister Ikramullah Darjo, Legal Counsel Mortada Wahhab, Solicitor General, Secretary General, Additional Secretary General of the Interior and any selected member to examine the proposed recruitment rules and submit their report within Month.

The Cabinet authorized the Revenue Board Chairman to authorize any official to remove encroachments with the structure, if any, that were raised on public property.

The Department of Empowering Persons with Disabilities in the Cabinet presented a policy on “adopting a special school program,” saying that it would enable them to benefit from the expertise of the private sector. The period of adoption may range from three to five years. The Cabinet approved the policy with instructions to bring in professional and experienced bodies to adopt schools.