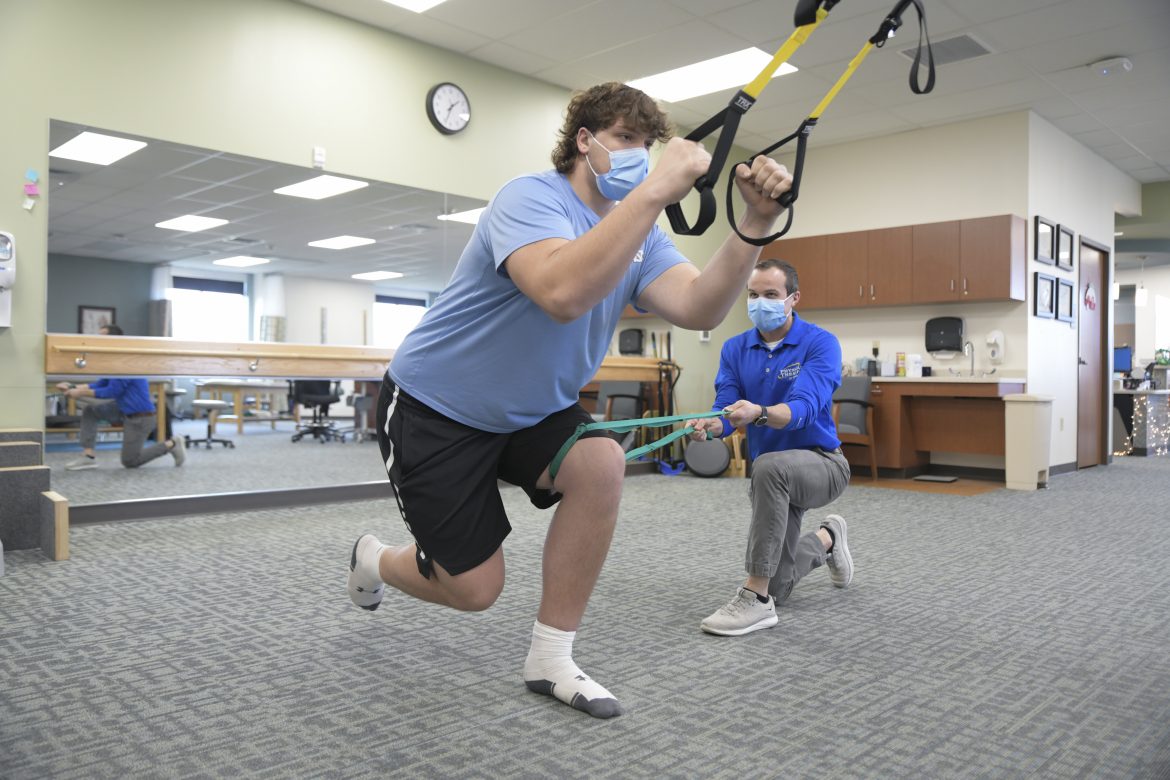 Every time Justin Kanyuk implants, pushes, or rotates his left foot and left leg during a University of North Carolina football game next year, he’ll rely on the strength and stability of his kneecap, which St. Luke’s expertly reconstructed. Orthopedic surgeon Scott Durocho, DO.

This 18-year-old mountain would be up front at UNC to fend off defenders or create holes for running backs to plow. 6’6″, 315 lbs. Becca’s super posture has boundless faith in Dr. Dorocho, who surgically reconstructed his left knee after rupturing the medial femoral ligament—the thin band that holds the kneecap in place—in 2019 while training.

Kanyuk signed his contract for a full athletic scholarship to become Tar Heel on December 15 at a party in Bekahi, where he starred and started for four years as the Golden Hawk’s attacking man. In his sophomore year, he dislocated his knee as he lunged into a leak-proof sled and twisted it while training.

“My legs went one way and my knees the other way,” explained the student-athlete who lives in Bath. He remembers that the pain was immediate and “aching.” The fear of missing out on playing time, or perhaps having to hang nails for good, never crossed his mind, knowing Saint Luke’s stellar reputation in orthopedics and sports medicine.

Dr. Dorocho meticulously reconstructed Kanyuk’s knee using a thin “donor” ligament from the cadaver, and secured it to the femur and patella with small resorbable screws.

“It’s like new,” said Dr. Dorocho. “He shouldn’t have any problems with this kneecap.”

The surgeon said he performs this hour-long procedure about 30 times a year on athletes, but about as often on patients who have a tear outside of sports. He predicted that Kanyuk would have to withstand the cruelty, and sometimes punishment, of team sports even better than the original or “native” ligament of his patient.

Kanyuk praised his surgery as an All-Star, adding, “He explained everything before the surgery. I knew I could trust him.”

He remembers how much focus and sweat he put into rehabilitating his knee after surgery, with guidance from physical therapist Jeremy Kushner, DPT, at St Luke’s Nazareth Physiotherapy. Now he goes to work to keep him strong and agile, confident that he will be tested every time he is on the instep.

“Justin is a very loyal and motivated student-athlete,” Kushner said. “He achieved his rehabilitation goals sooner than I expected.”

His program consists of strengthening the quadriceps, a combination of movement and balance exercises, and after that, sprinting and pivot rotation exercises. Kushner was impressed by Kanyuk’s passion at PT and later when he continued rehab at home.

The athlete is grateful to Kushner as well, saying, “He has taught me a lot about keeping my knees strong and healthy in the long run.”

Back on his feet after surgery and six months into rehab, Kaniuk quickly played as aggressively as ever, shielding the midfielder from a menacing defense line and creating opportunities for Bekahi to emerge.

He predicted his chance of the same injury to his right knee would be “zero percent,” saying he continues to strengthen his quads and hamstrings, keeping them flexible and stable as instructed by Kushner to do so during his PT.

But he’s more than just a tight wrestler. Outside the field, Kanyuk dives into his schoolwork, takes advanced courses, socializes with friends and volunteers for the Visiting Nurses Association in St. Luke’s.

“Since 2019, Justin has volunteered at many of our events, including the annual Hospice Bike Ride Tour, Hospice Butterfly Release, and Hospice Services of Remembrance for Bereaved Families,” said Lisa Giovanni, MSN, RN.And President of the Visiting Nurses Association at St. Luke’s Home Health / Hospice Inc.

“We congratulate him on his scholastic achievement and dedication as a high school student,” she added.

Helping Kaniuk score relegation points will be Kaniuk’s goal on the pitch. Academically, he will earn a degree in Civil Engineering with the same enthusiasm and intelligence that he brings to football and the rest of his life.

He praised the teamwork of orthopedic care and physiotherapy at St. Luke’s that got him back on his feet and into the game he loves, which resulted in a full scholarship to a fantastic university.

“I wouldn’t have done it without Dr. Dorocho and Jeremy,” Kanyuk said. “They are a big reason why I’m able to play again, because I’m back on the field doing what I love.”

Note: This local health news is brought to you in partnership with Saint Luke’s University Health Network.