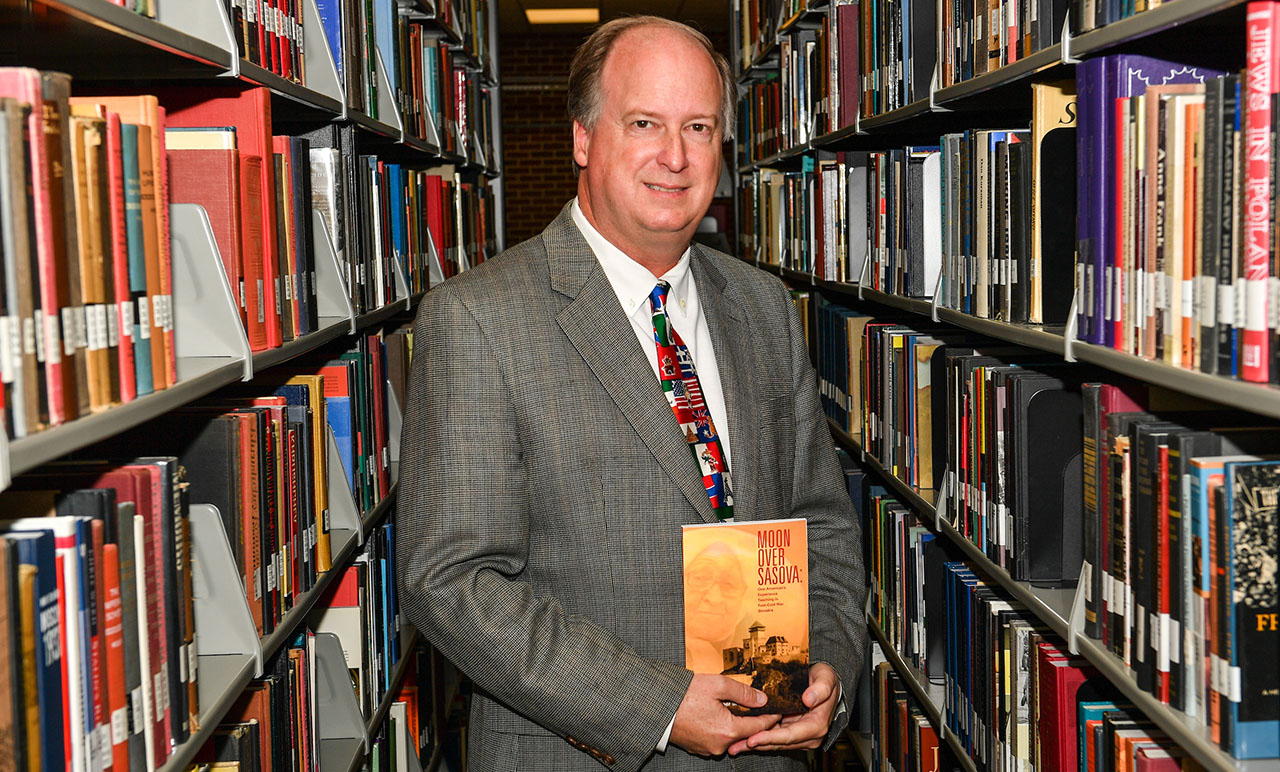 Dr. Chris Schafer, Dean of Library Services at the University of Troy, has published a new book that documents his time teaching and traveling in post-communist Europe during the 1990s.

Schaffer began the journey he highlighted in “Moon Over Sasova” in Mannheim, Germany through a study abroad program at Auburn University in 1991.

When Shaffer took a weekend trip to Prague, he came across a sign asking for English teachers.

What Shaffer didn’t know was that the program was based not far from home: the University of South Alabama. Dubbed Education for Democracy, the program was founded shortly after the 1989 Velvet Revolution that ended communism in what was then Czechoslovakia.

“The goal was to send people there to teach English because the previous government didn’t approve of it,” Shaffer said. “At the same time, the goal was to teach people that Americans are friendly and pose no threat.”

Shafir arrived in Slovakia in 1993, two weeks after the Velvet Divorce, which led to the peaceful dissolution of Czechoslovakia, and led to the creation of an independent Slovak state.

“I arrived in Slovakia 14 days after it became a country,” Shafir said.

Shafir’s book tells of his time in Banska Bystrica, Slovakia, a medieval mining town in the 13th century CE, through the eyes of a 22-year-old American. The city itself was filled with well-preserved Gothic architecture. He lived in a large suburb of Banska Bystrica called Sasova that was filled with identical blocks of apartments which were in contrast to the beauty of the actual city itself. These apartments combined with the gray of winter skies have a way of making everything look the same. Shaffer remembers the first time he encountered cold and snow to go to the grocery store.

“I was like, I’ll never find my way out of it if I leave,” Shaffer laughed. “It took me three hours to come back because everything looked the same.

“You need to know your address, at the very least.”

He traveled across the country to explore different cities when he took a leave of absence from teaching his mother tongue and says that studying abroad provided an invaluable opportunity.

“My experience shows how much can be gained by studying abroad,” he said. “I hope our students at TROY will benefit from the study abroad experience when they can.”

Some of the most memorable moments were the interactions with the students he was able to touch.

“The students were so much fun to teach,” Shaffer said. “You’d go out and drink with the students after class and get a lot of ideas about what their lives were like.”

Shaffer also used his time in Europe to travel to countries as diverse as Poland, Hungary, Austria and Slovenia – trips he highlights in his book.

In the new book that documents his travels, Shaffer recounts his time with other Americans, as well as his lack of contact with his family back home. One phone call to his parents cost about $45, but a little interference from the outside world proved to be a plus.

“We were really there, cut off from our families,” Shaffer said. “It was really cool to really experience this without influences from the outside.”

Instead of calling, Shaffer and his family would write letters back and forth, letters that 28 years later would be a feature of Shaffer’s book.

“This was one of the ways I was able to recreate the experiences for the book,” Shaffer said. “I had messages that people would send to me and, in some cases, rescue their messages from me.”

Shaffer was able to work with other faculty at Troy University to launch his book, including Professor of Graphic Arts Ed Noriega for cover design, and Head of English Dr. Kirk Cornott to read and advise on the manuscript.

Shaffer’s book also contains recommendations from authors Cassandra King and Michelle Richmond, who read and enjoyed the book before publishing.

Moon over Sasova is currently available for pre-order directly from publisher Hellgate Press, and ships on Monday, November 15.