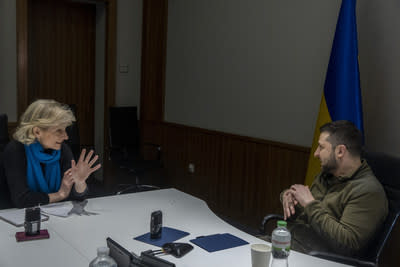 Zelensky: “We believe in victory. It’s impossible to believe in anything else”

LONDON, March 27, 2022 /PRNewswire/ — At his war room in Kyiv, UkrainePresident Volodymyr Zelensky spoke to editors from The Economist in an exclusive interview about his country’s battle and the struggle of light over dark.

The Economistone of the world’s most trusted sources of global news and analysis, spoke at length to Mr Zelensky in “the fortress” on March 25th 2022 about the current state of war with Russia and what winning looks like for Ukraine.

When asked if Vladimir Putin believes Ukraine has a right to exist, Mr Zelensky said “I don’t think he visualises in his own mind the same Ukraine we see. He sees Ukraine As a part of his world, his worldview, but that doesn’t correspond with what’s happened over the last 30 years.“

Highlights from the interview

On Putin and warfare

“The invaders do not even mourn their own consequence,” he says. “This is something I do not understand. Some 15,000 [Russian soldiers] have been killed in one month…[Vladimir Putin] is throwing Russian soldiers like logs into a train’s furnace. And, they are not even burying them.”

Views of America and the West

“[Our Western partners] did not implement sanctions to disconnect Russia From the SWIFT system, imposes an embargo on Russian oil and gas exports. All these sanctions are incomplete. They have been threatened, but not yet implemented. Now we are hearing that the decision depends on whether Russia launches a chemical attack on us. This is not the right approach. We are not guinea pigs.”

He is emphatic about what that end will be: “We believe in victory,” he says. “It’s impossible to believe in anything else. We will definitely win because this is our home, on our land, our independence. It’s just a question of time.”

“Victory is being able to save as many lives as possible, because without this nothing would make sense…Our land is important, yes, but ultimately, it’s just territory.” To save everyone, defend all interests while protecting people and not give up territory is probably an impossible task, he concedes. He does not know when or how it will end, but he knows that “it will end with us still standing here defending” life in Ukraine.

About The Economist (Economist.com)

With a growing global audience and a trusted reputation for insightful analysis, The Economist is one of the most widely recognized sources covering current affairs in the world. In addition to the weekly digital and print editions and website, The Economist publishes Espresso, a daily news app, and Global Business Review, a bilingual English-Chinese product. The Economist Produces several podcasts each week and short- and long-form video. The Economist maintains robust social communities on Facebook, Twitter, LinkedIn and other social networks. A recipient of many editorial and marketing awards, The Economist was named the most trusted news source by the 2017 Trusting News Project Report.